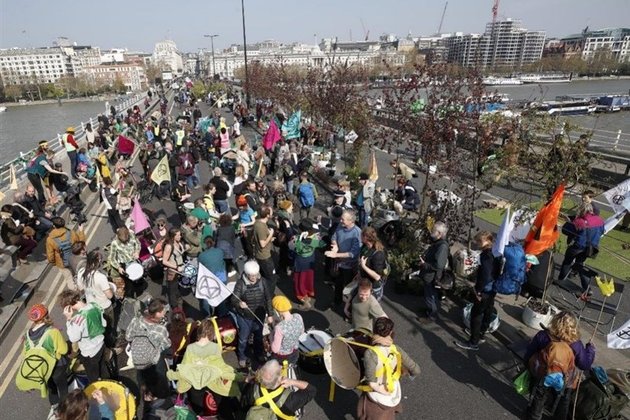 TEHRAN (Tasnim) - Around a dozen environmentalist protesters on Thursday attempted to block Londons financial nerve center, demanding strict norms to reverse climate change. - Other Media news - They stood in front of London Stock Exchange (LSE), blocking its entrance in the morning, as it opened for trading.

At least four protesters climbed on a light railway train at Canary Wharf, a busy station at the heart of financial district. Police later removed protesters from the scene, to enable smooth functioning of the LSE -- one of world's largest trading centers.

The protesters are asking the UK government to acknowledge there is an environment crisis, demanding enactment of legally binding policies to reduce carbon emission by 2025.

They are also demanding to establish a citizens' assembly to devise an emergency plan of action to tackle climate breakdown and biodiversity loss, besides monitoring actions needed to reverse climate change.

Holding banners reading "climate emergency", the protestors are asking the corporate to acknowledge the truth that -- "you can't eat money".

The protests by environmentalist group -- the Extinction Rebellion -- has entered into its 11th day. Earlier, they had agreed to end their protests in two central London locations.

"We're here to tell the financial sector and Mayor Sadiq Khan that we will not go back to business as usual while life on earth continues to be destroyed," the group tweeted, Anadolu agency reported.

London Metropolitan Police said 1,088 protesters have been arrested as of Wednesday evening and 69 of them have been charged for public disorder offences.

They blocked some main and busy roads in London, which includes Waterloo Bridge, Oxford Street, Piccadilly Circus and Marble Arch since Monday morning.

Police opened Waterloo Bridge, Oxford Street and Picadilly Circus earlier this week as the Extinction Rebellion agreed to leave the sites after arrests.