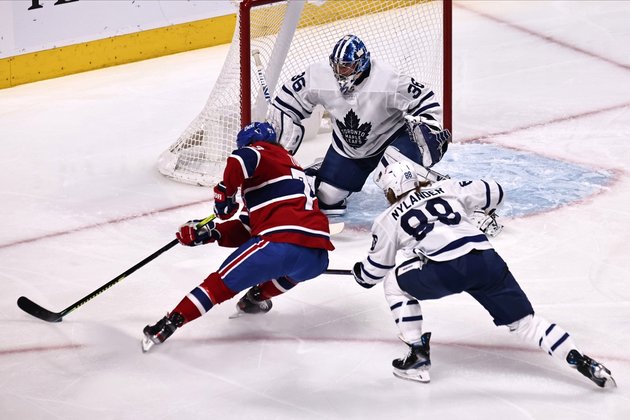 Caufield took a pass from Jeff Petry and shot from the slot for his second career NHL goal at 4:43 of overtime. He also scored in OT against the Ottawa Senators on Saturday.

Phillip Danault scored in the final minute to tie the game for Montreal.

Tyler Toffoli also scored for the Canadiens (24-18-9, 57 points). Petry and Nick Suzuki each had three assists.

Auston Matthews and Morgan Rielly scored for the Maple Leafs, who had their winning streak end at five.

The teams have two more meetings this season, Thursday and Saturday in Toronto.

Rielly scored his fifth goal of the season on a screened wrist shot from the right point at 4:07 of the first period. Alex Galchenyuk and William Nylander earned assists.

Montreal had both power plays in the first period. The first was the most eventful. Caufield hit a post and Toronto's Mitchell Marner missed a breakaway.

Montreal tied the game on its third power play at 1:55 of the second period. Toffoli scored his 28th goal from the left circle on a cross-ice pass from Suzuki. Nick Foligno was off for tripping.

Toronto had the next two power plays. Campbell stopped Artturi Lehkonen on a two-on-one to foil Montreal's bid for a short-handed goal on the first.

Matthews deflected Jake Muzzin's shot at 17:21 of the second for his 39th goal.

Foligno went to the dressing room near the end of the second period. He did not return because of what was termed an upper-body injury.

Toronto had a 21-14 advantage in shots on goal after two periods.

With Allen out for an extra attacker, Danault scored his fifth goal of the season from the side of the net at 19:08 of the third to force overtime.