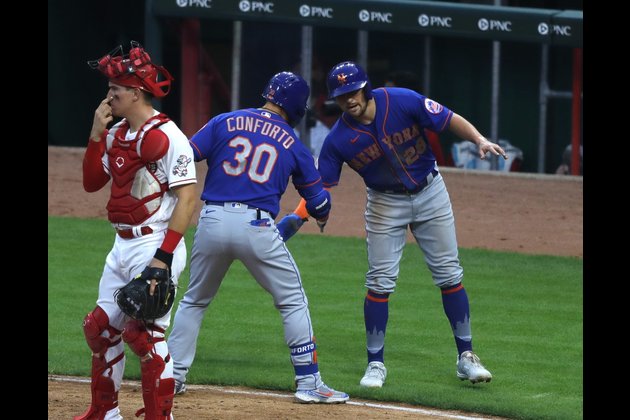 The New York Mets are finding different ways to win games after their most disheartening loss of the season. The Cincinnati Reds are just trying to find any way to win any game since the All-Star break.

The two clubs meet in the middle game of their three-game series in Cincinnati on Tuesday night following a marathon contest Monday night.

After New York lost Saturday on a walk-off grand slam in Pittsburgh, Michael Conforto's go-ahead homer in the ninth inning Sunday lifted the Mets to a 7-6 win after they trailed the Pirates 6-0 in the first. On Monday, it took 18 hits and seven home runs to overcome four errors and fend off the Reds 15-11 in 11 innings.

Following the 4-hour, 45-minute marathon Monday night, Jauss joked, "I thought it was like an hour-and-a-half game. Was it that long? Concession stand must've made a whole lot of money tonight."

Right-hander Jerad Eickhoff started Monday's game in place of injured ace Jacob deGrom, and the Mets will send another spot starter to the mound Tuesday. Right-hander Robert Stock (0-2, 7.88 ERA) will make his third start of the season.

Stock lasted exactly four innings in his prior two major league outings this year, June 16 for the Chicago Cubs against the Mets, then July 7 for the Mets against the Milwaukee Brewers. He has allowed one hit and two walks while striking out three in four scoreless innings over three career appearances against the Reds, all in relief in 2018.

The Reds will send lefty Wade Miley (7-4, 2.80 ERA) to the mound as they try to end a four-game losing streak coming out of the break. The Reds are 7-1 in Miley's past eight starts, and the veteran pitcher hasn't lost a decision since dropping his first two after his no-hitter in Cleveland on May 7.

Miley is 0-4 with a 4.30 ERA in five previous career starts against the Mets, though he will be facing them for the first time since August 2015 when he was with the Boston Red Sox.

The battered Reds pitching staff went through eight pitchers Monday night. Included in that group was Ryan Hendrix, who was pitching his fourth straight day and allowed two homers in the 11th inning.

Asked if the defeat upset him, Reds manager David Bell said, "When you allow that many runs, that's the easy thing to say. On the bright side, there were guys who stepped up. Just one of those nights. Allowed some homers, lots of runs. What a game to go that deep, extra innings."

The contest also featured the return of Reds slugger Nick Castellanos, who entered in the 11th inning as a defensive replacement and flied out to deep right in his lone plate appearance. Castellanos had not appeared in a game since getting hit by a pitch on the right wrist in the third inning Friday against the Milwaukee Brewers.

"Nick is still dealing with some soreness," Bell said. "We wanted to make sure it was a very, very important situation. He was the last guy on the bench. He made himself available. He came out of that swing pretty well."